Ignoring and removing objects from documentation

You often don't want to document all the objects in your database. Some of them are irrelevant. Temporary or obsolete objects for instance. Dataedo lets you exclude such objects from imports and repository. To do this you have 2 options:

In both cases, such object (its name) will get added to ignored objects list. The object on that list will be ignored from schema updates. Each documentation has its own list - if you import the same database into a more than one documentations in a repository you may ignore different objects in each.

Ignoring objects from import and update

To ignore objects from import or update just uncheck it on the Select objects to import tab of import/update wizard. This applies only to new objects.

Objects that get unchecked are added to ignored objects list.

If you imported an object but you don't need it in your documentation you can remove such object. To do this select object in the tree navigation, right click and choose Remove from repository option or press Remove button in the ribbon.

To check what objects are on the ignored list run Update documentation wizard and go to Select objects to import tab. Ignored objects will be displayed on the list with 'Ignored' status. Note: this list only contains objects that exist in the database. Objects that were added to the list but do not exist in the database anymore are not visible (but can be found in ignored_objects repository table). 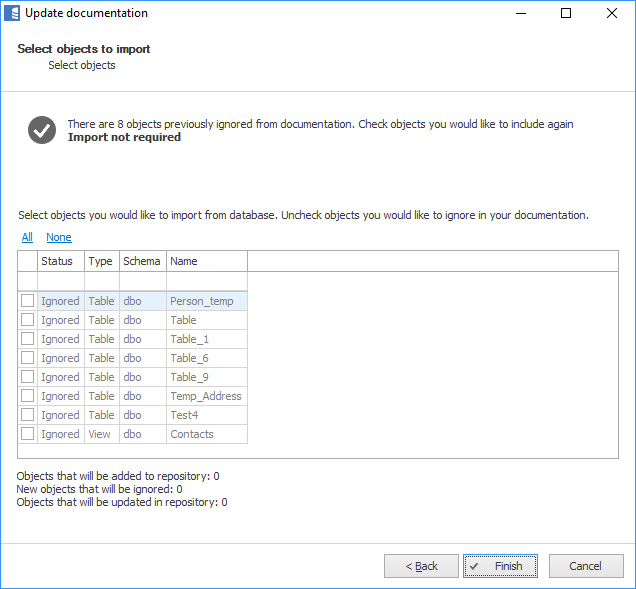 If you excluded an object by mistake or you changed your mind you can add this back to the repository with Update documentation wizard. Go to Select objects to import tab, check object you want to restore and proceed with the update.