What is Dataedo repository

Dataedo repository is a data storage that keeps all your database schemas and documentations.

It can take two forms:

This is a server based repository that supports concurrent work and requires an instance of SQL Server. This is actually a regular SQL Server database (no other software is installed) with a predefined schema to keep all Dataedo data.

This is a .dataedo file that stored on any disk.

This is actually a SQL Server Compact database that is stored as a file on your disk. This database has the same schema as server based.

It is advised to limit the number of repositories. However, you can have as many repositories as you like.

Create one repository for each group of users - this could be a team, department, project or product.

If you are software development or consulting company you may choose to have a separate repository for each customer. Those repositories can be located physically at your customers' premises.

What is a database documentation

In Dataedo, a documentation is a document describing single database or schema. It holds a schema definition of documented database along with user-generated descriptions - text descriptions, images, modules and ER diagrams. It enables fully offline work - after import of schema, no access to documented database is required (except in a case of update of the schema that changed in a database).

No actual data is read, imported and held in the repository.

You can have an unlimited number of documentations in every repository (limited in Free editions to just one). 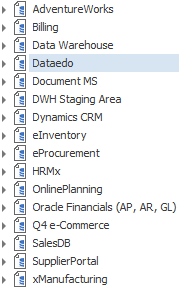 What documentation consists of